According to ADST, documents later released from KGB archives in the 1990s showed that “the Afghan government clearly authorized an assault on the kidnappers despite forceful U.S. demands for peaceful negotiations and that the KGB adviser on the scene may have recommended the assault as well as the execution of a kidnapper before U.S. experts could interrogate him.

FSO Bruce Flatin was the Political Counselor in Kabul at the time of Dubs’ assassination. He was interviewed by ADST’s Charles Stuart Kennedy in 1993. Read more from his oral history interview in The Assassination of Ambassador Spike Dubs — Kabul, 1979. Bruce K. Byers who was USIS Press Attaché at U.S. Embassy Kabul from 1978-79 wrote Remembering Ambassador Dubs, and the Future of Afghanistan for American Diplomacy in 2009.  Ambassador Dubs is buried in Arlington National Cemetery.

Most recently, David Langbart, an Archivist in the Textual Records Division at the National Archives at College Park posted  in The Text Message blog his Tribute to a Fallen Diplomat that includes a 1979 cable about Ambassador Dubs:

While the outline of his career covers all the bureaucratic bases, it does not reflect the ambassador’s achievements nor does it reveal the man.  The editors of the WASHINGTON STAR asked Warren Zimmerman, a former subordinate of Dubs at a posting in Yugoslavia and then working in the U.S. embassy in Paris, for a contribution about the ambassador.  In response, he prepared a draft under the title “Portrait of a Diplomat” that he sent to Washington in the following telegram, from the Central Foreign Policy Files (NAID 654098).

Clips from the Zimmerman’s February 1979 cable below. Click here to read the entire cable via NARA.

On November 15, 1944, Robert M. Scotten, a career Foreign Service Officer serving as U.S. minister to the Dominican Republic, submitted his resignation to President Roosevelt “in accordance with traditional usage” according to The Text Message blog of the National Archives.  Upon receipt, FDR sent a copy of the letter to Under Secretary of State Sumner Welles requesting preparation of a response for the President’s signature.[2]

The Under Secretary sent the draft to the President under cover of a letter that read, in part:

It had been my understanding that during your Administration you have not expected chiefs of mission who have been promoted by you from the ranks of the Foreign Service to present their resignations before the commencement of your new term of office.  In 1936, and again in recent weeks, I have told certain chiefs of mission who come within this category that that is my understanding.

In that belief I have drafted a reply for you to send to Scotten along these lines.

If I am mistaken in this understanding, will you let me know accordingly?[4] 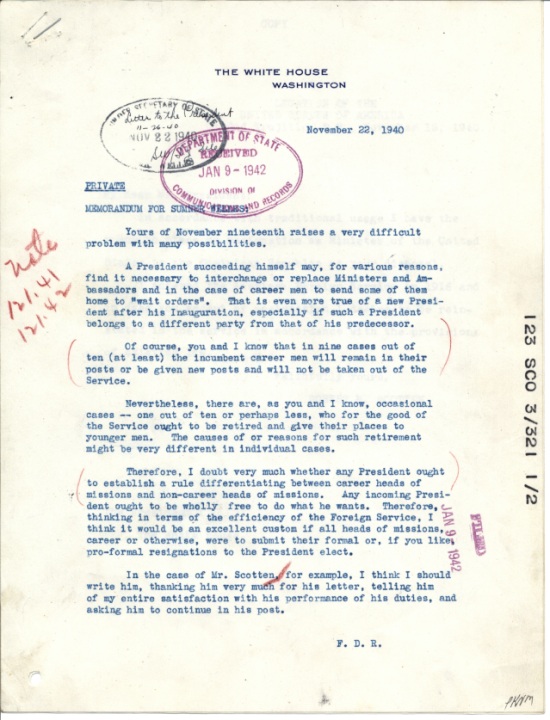 Memorandum from President Franklin Roosevelt to Under Secretary of State Sumner Welles, November 22, 1940 via The Text Message blog

Continue reading, “In the Interest of the Efficiency of the Foreign Service”: Changes in US Diplomatic Representation Abroad after the Election of 1940.

According to The Text Message blog, a similar directive went out after the election of 1944. The Under Secretary of State Edward Stettinius asked President Roosevelt if he wanted to follow the same practice and FDR “said he thought it would be wise.” As a result, the Department of State sent the following telegram:[1]

Also see “In the Interest of the Efficiency of the Foreign Service”: Changes in U.S. Diplomatic Representation Abroad After the Election of 1944

The  formal resignations by chiefs of mission has been the practice after every presidential election.  We understand that a similar cable goes out even when there is a second presidential term.  We are curious if the language of this cable has changed through the years.  We will update if we are able to locate a copy of the current directive.