We recently blogged about the attacks on American diplomats in Havana (see U.S. Diplomats in Cuba Sonic Attacks: As Serious as Mild TBI/Central Nervous System Damage? August 24, 2017); 16 USG Employees in “Sonic Attack” and More on The Secret History of Diplomats and Invisible Weapons August 28, 2017).

Former FSO James Schumaker who served in the USSR and later Russia and Ukraine and was diagnosed with Chronic Lymphocytic Leukemia in 1985 reminded us of the Moscow microwaves controversy and recently notes that the lesson is that “party doesn’t matter — every administration tries to bury bad news when Embassy personnel are the only ones affected.”

Via the Association for Diplomatic Studies and Training (ADST) Oral History:

U.S. relations with Moscow through the decades have been problematic at best while the embassy itself has been the subject of spy scandals, eavesdropping and other Cold War intrigue. One of the strangest episodes was revealed in the 1970s, when the U.S. confirmed that the USSR had been beaming microwaves at the embassy for the past 15 years. One concern was that the Soviets were trying to inflict physical harm on the Americans working there. 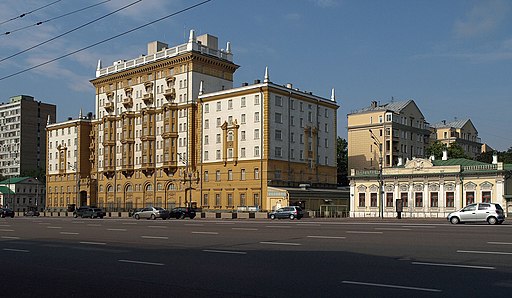 Microwaving Embassy Moscow brought back a flood of memories to James Schumaker, who served most of his career in the USSR and later Russia and Ukraine. In this account, he describes how U.S. Ambassador to the USSR Walter Stoessel threatened to resign, the widespread concern many Americans posted at the embassy had regarding potential health problems, especially when two ambassadors died of cancer, and his own experience with Chronic Lymphocytic Leukemia.

James Schumaker:  The existence of the microwave problem had been kept under wraps for years, first because no one knew that there might be health consequences, and later, according to unconfirmed reports, because Henry Kissinger wanted to avoid damaging chances for détente.  When Ambassador Stoessel (seen at left) learned about the problem, he threatened to resign unless the Embassy community was told.  As a result, the microwave story was finally made public in a press conference called by the Ambassador.

In the wake of Ambassador Stoessel’s announcement, many in the Embassy community felt betrayed about being kept in the dark for so long, and still more were anxious about the effect the microwaves might be having.  Some thought that the microwaves were used by the Soviets to activate the numerous listening devices they had emplaced in the building prior to American occupancy.

Others believed that they were a jamming signal designed to foil our own electronic snooping devices (a highly classified report that came out in the 1970s leaned to this interpretation, and this is what the Soviets told us as well).  Still others thought that the Soviets, who apparently knew a lot more about microwaves than we did, were using them to affect the mental states of Embassy employees.
[…]
For the most part, I was blissfully unconcerned about the microwave controversy.  At the time, it seemed to me that it was an issue taken more seriously by Embassy spouses, who were afraid for their children, than by the Embassy leadership, which in fact was in the crosshairs of whatever the microwaves might be doing.

Periodically, I would see Soviet technicians standing side by side with American techs on the upper floors of the Chancery.  They were measuring ambient levels of microwave radiation.  Naturally, the Soviet equipment didn’t find anything, while ours did.  I thought it was funny at the time.  Screens were put up on the Chancery windows, which were said to diminish the amount of microwave emanations getting into the Embassy.  I didn’t think much about that, either.  I just continued to do my work and not think about the possible consequences.

Microwaves continued to be beamed at the Embassy throughout my tour, and, though the levels went up and down over the years, emanating first from one, and then two locations, the microwaving of the Embassy continued until at least 1988.  Over the years, thousands of Americans were exposed.

Shortly after my tour was over, I found out that my cavalier attitude toward the microwave issue was not at all justified, at least in my own personal case.  Med informed me in late 1979 that my own white cell count was much higher than normal, and advised me to continue testing.  In 1985, my white cell count got high enough for MED to recommend that I see a hematologist, so I went to a local doctor in San Clemente, Dr. Tsang P. Fong.

He did a bone marrow test (the one where they hammer a spike into the pelvic bone – very uncomfortable).  The test confirmed that I had Chronic Lymphocytic Leukemia (CLL) stage zero, but that chemotherapy was not advisable, since I had no symptoms and the cure would be worse than the disease.
[…]
I determined to fight the disease as best I could by leading a healthy lifestyle, although, paradoxically, I then volunteered for a high-risk assignment to Kabul in 1988.  Perhaps in the back of my mind I had this feeling that I could take more risks, since I didn’t have very long to live anyway — a kind of “who cares?” illogical approach that has gotten me through many crises in life.  State Medical knew about the CLL diagnosis and downgraded me to a “2” Medical clearance, but didn’t stop me from going overseas, mainly because the jobs I was volunteering for often had no takers.

William Andreas Brown discusses the widespread concern among Americans working at the embassy at the time and their anger at the State Department for its lack of transparency on the issue. Excerpted from his Oral History interview conducted by Charles Stuart Kennedy beginning in November 1998.

William Andreas Brown: I have to tell you what a shock it was in about 1972 or 1973 to wake up to the great, microwave scandal and to find that Secretary of State Henry Kissinger and his associates had kept from us the fact that for years we had been bombarded by microwave apparatuses, directed straight at the embassy in Moscow. I remember being one of a small group of officers in 1972 or 1973 when news of this development broke. We raised our voices in despair, dissent, and so forth.

We were finally ushered into a room where Larry Eagleburger, Kissinger’s Special Assistant at the time, briefed us and made some sort of presentation, assuring us that steps would be taken, and so forth. He said that medical studies were under way, and the evidence thus far was that these microwaves had not been deleterious to our health.

This was somewhat reassuring until, at the end of the meeting, Larry Eagleburger said, “Now, rip up all of your notes and give them to me. Nobody can leave with notes on this discussion.” One said to oneself: “What in the hell is going on here?”

It turned out that the Soviets had been bombarding us with microwaves, beginning in about 1964 or 1965. Why they had done this remained a mystery. How they had bombarded our embassy remained somewhat of a mystery, as well as why they had done so. Also a mystery was what was the response. We were furious. We felt betrayed by the leadership of the Department of State and by the Secretary of State himself…I’m speaking now of the microwave radiation scandal, as I would call it, of the early 1970s, which harked back to the early 1960s.

Many of us who had served in the embassy felt betrayed as people who had put so much into our efforts and who had volunteered to serve in Moscow. We probably would have volunteered anyway to serve in Moscow, even if we had known about this. However, we learned only years later that this had happened and that information on it had been kept from us. Foreign Service physical examinations routinely include a blood test.

Unbeknownst to us, the Department of State was testing our blood to see what, if anything had happened to us as a result of the microwave radiation. This was a pretty jolting realization.

Q: Before we leave that matter, was consideration ever given to our saying to the Soviets: “If you keep up this nonsense, we will close our embassy in Moscow?”

BROWN: Or, we could say, if the Soviets kept up this nonsense, we would do exactly the same thing to the Soviet Embassy in Washington. But, oh, no, that would have been nasty, and nothing like that was done. We felt pretty strongly about this. It affected morale and assignments to positions in the embassy.

Q: What was the purpose of what has to be regarded as this campaign by Soviet authorities against the health of members of the staff of the American embassy in Moscow?

BROWN: This takes you into realms that I’m really not qualified to discuss. I was aware of various theories and of measures and countermeasures that might be taken. However, the point is that microwave emissions were being beamed at us. This point came home to me particularly one day when a visiting technician from the State Department came with equipment and said, “Do you mind if I set this up in your office?”

I said, “Okay, but why here? Why in my office?” He said, “Because actually there are at least two beams being directed at the embassy. One comes in from the front of the embassy building, and one comes in from that great, white building over there, which is called the ‘White House.’  You know, where the Russian Parliament meets.”…

“One beam comes this way, and the two beams intersect right here at your desk. So I’d like to set this up.” I thought: “My God! It makes you think.” But the Soviets weren’t turning these beams off. This was a disturbing development. As I said, it affected assignments to positions in the embassy in Moscow, as well as other things.